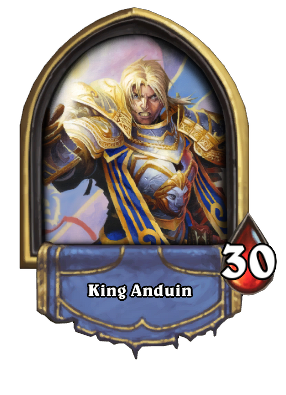 King Anduin is an alternate hero for the

Priest class. It is obtained by winning 1,000 Ranked, Arena, or Duels games as priest.

This portrait depicts Anduin Wrynn as the High King of the Alliance, as he appears in Battle for Azeroth.

Following Varian Wrynn's death, Anduin permanently assumed the throne of Stormwind. In the face of the Legion's onslaught, Anduin grew certain that lasting peace would not be achieved without bloodshed, and as he worked to save lives and fend off the demons' advance, Anduin was forced to reconcile his yearning for peace with the necessity for war. In the wake of the Burning Legion's defeat, an escalating war with the Horde — now led by Warchief Sylvanas Windrunner — threatens everything Anduin holds dear. Though he now leads the armies of the Alliance across all of Azeroth, Anduin's ultimate goal is to put an end to the bloodshed he so abhors, even if it means getting his hands dirty.

When viewed in the collection, King Anduin has the following flavor text:

The boy who would be King is King now, and woe be to anyone who crosses a priest powerful enough to wear plate. Obtained from winning 1,000 games as priest in Ranked, Arena or Duels.

All 1,000 Win heroes use the same emotes as the basic hero. For a list, see Anduin Wrynn#Emotes.