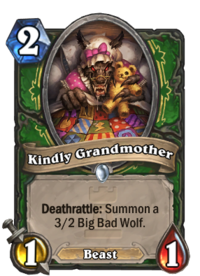 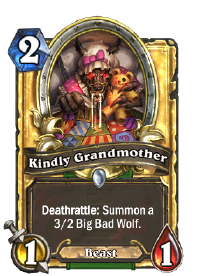 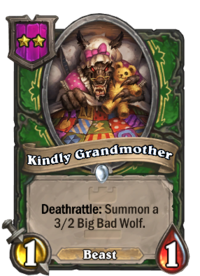 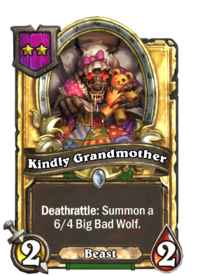 "Goodness! What… abundant drool you have."

Kindly Grandmother is a common hunter minion card, from the One Night in Karazhan set.

Two copies of regular Kindly Grandmother are obtained by defeating the Big Bad Wolf, the second boss in One Night in Karazhan's second wing, The Opera.

As a Wild format card, both regular and golden versions of Kindly Grandmother can also be crafted for the following amounts: 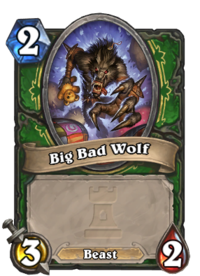 Kindly Grandmother offers good value for its cost, providing a 1/1 and a 3/2 for just 2 mana, effectively combining a Bloodfen Raptor and a Wisp in one card. Both minions are Beasts, and the Grandmother could benefit from Deathrattle synergies like Forlorn Stalker or Princess Huhuran.

Summon
Such big teeth I have.

The Grandmother in World of Warcraft

Grandmother is the disguise of The Big Bad Wolf when first encountered in Karazhan. Players can talk to her, and completing the dialogue will start the fight. The Wolf's disguise in Hearthstone is not quite as convincing, but still serves to protect him from premature destruction.

Big Bad Wolf
The better to own you with!