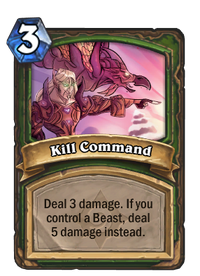 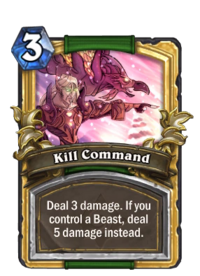 Deal 3 damage. If you have a Beast, deal 5 damage instead.

Kill Command is a hunter spell card, from the Basic set.

Two copies of Kill Command are a reward for raising a hunter to level 10.

Two Golden copies of Kill Command are a reward for raising a hunter to levels 49 and 50.

Kill Command is uncraftable and cannot be crafted or disenchanted.

A cheap and powerful direct damage spell, Kill Command is a vital part of most hunter decks and strategies. Keeping a low cost Beast such as Timber Wolf in your hand makes it easy to fulfil the bonus damage condition, even if all friendly Beasts are destroyed.

"In truth, she needs no order to kill. I only tell her whom to spare."

In World of Warcraft, Kill Command is a Beast Mastery hunter ability that is learned at level 10. It causes the hunter's pet to deal damage to the target.