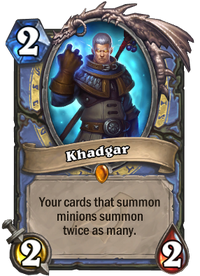 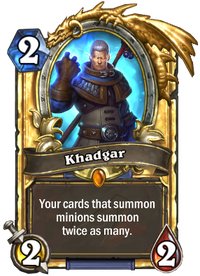 Your cards that summon minions summon twice as many.

Khadgar is a Tier 3 minion in the Battlegrounds game mode.

Khadgar is a situational value card for builds that use token-summoning minions. He doubles or triples up minions summoned from Deathrattle minions, plus minions like Security Rover and Imp Gang Boss.

He'll also increase the number of minions summoned from Tier 1 token generators, creating a net neutral Gold profit or easy triples with 2 or a Golden Khadgar, if you have the space for them. This can be combined with Brann Bronzebeard, to make a powerful Beast team using Mama Bears and Alleycats along with other Tier 6 Beasts, in one or two turns.

In later stages, Khadgar falls off due to his low base stats and lack of tribal synergy making him difficult to buff, leaving him vulnerable to getting sniped. Baron Rivendare will fill his role for builds that use big token minion generators, although he can be used as a backup plan if Baron Rivendare becomes too difficult to find.