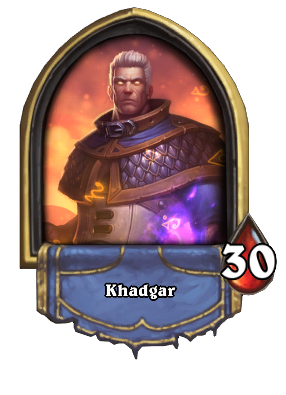 Khadgar is an alternate hero for the 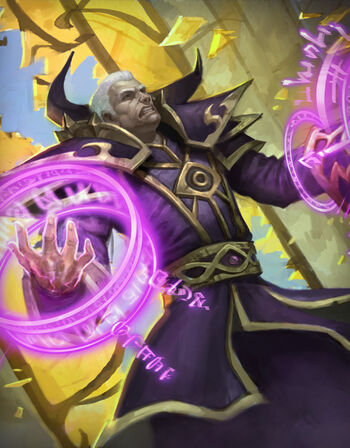 Khadgar in the TCG

The Archmage Khadgar is a well-known hero to the denizens of Azeroth! Once Medivh’s apprentice, now he’s renowned as one of the most powerful Mages in history! Whether battling against shadowy councils, or holding the line against unwelcome iron incursions, Khadgar is always a staunch guardian of Azeroth and the entities that call it home.[1]

During the events of Warlords of Draenor, Khadgar leads the forces of the Alliance and the Horde to shut down the Dark Portal in Draenor, and later works with them to cripple the Iron Horde in various areas of the world. He also focuses heavily on combating Gul'dan and the Shadow Council.

Khadgar is unavailable to new players. It's unknown if he will become available again.

In a later promotion in China, Khadgar was offered for playing Heroes of the Storm.

Once unlocked and selected for use, Khadgar is used as the hero whenever playing with a mage deck. Khadgar comes with his own portrait, emotes, and hero tray art, as well as featuring a special animation when using his Hero Power, Fireblast.

When viewed in the Collection, Khadgar has the following flavor text:

His statue in Stormwind reflects his heroism, not his ego.
Khadgar was available as a special promotion in April 2016. 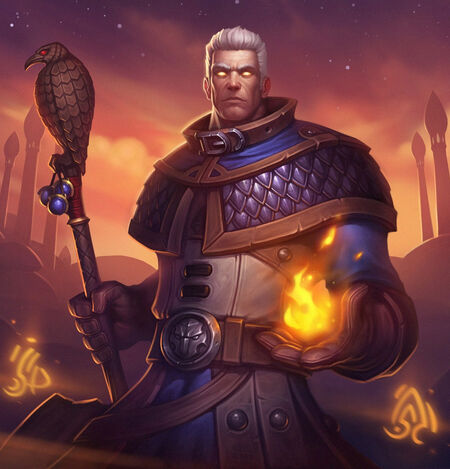 Due to coordination issues, the accompanying patch was released on iOS prior to other platforms, resulting in some problems for those trying to play with the hero. Because of the way the game handles players using different patch versions, those who had logged in with an updated client on iOS were then unable to log in on other platforms, due to the patch not yet being available except on iOS. In addition, players who had updated were unable to be matched against opponents who had not yet updated to the upcoming patch.[2] This behaviour is normal for patch updates, but was notable in this case due to the patch being unavailable on most platforms, with a relatively long delay before full release.

The problem was resolved with the release of the patch on other platforms around 10 hours later.

Purchasing Khadgar unlocks the following card back. This card back was also given to all players who had obtained Khadgar previously.