For other representations of Kel'Thuzad, see Kel'Thuzad (disambiguation).

Kel'Thuzad is an alternate hero for the 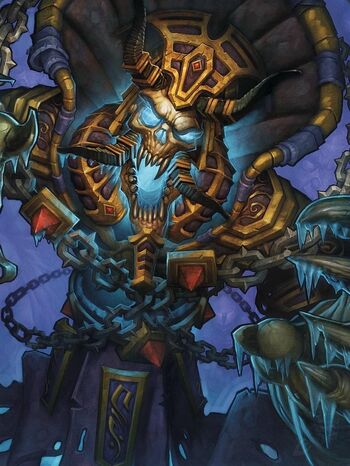 Kel'Thuzad is the final and main boss in the Naxxramas raid. As an undead lich and a powerful necromancer, Kel'Thuzad has the ability to bring creatures back from the dead. He first appeared in Hearthstone as the antagonist of the Curse of Naxxramas adventure.

The archlich known as Kel’Thuzad sits at the seat of power within Naxxramas, coordinating the normally mindless Scourge into a fighting force for the Lich King. In his mortal days, Kel’Thuzad was once a powerful human mage and high-ranking member of the Kirin Tor, working under the great Archmage Antonidas, leader of the Kirin Tor at the time. The Kirin Tor had a wealth of secrets and knowledge at their disposal, and Kel’Thuzad spent countless hours devouring every bit of knowledge he could get his hands on—even the darkest and most unthinkable of arcane arts, such as necromancy. He became increasingly more reclusive and shunned by his peers the further he delved into forbidden magic.

The Lich King’s words were both a threat and a promise. Kel’Thuzad would become his lieutenant, carrying out the Lich King’s whims, but in return he would gain power beyond his wildest dreams. Kel’Thuzad accepted these terms… as if he had much of a choice in the matter.[1]

Kel'Thuzad is only obtainable by purchasing the Scholomance Academy Mega Bundle, which is only purchasable with real money.

Once unlocked and selected for use, Kel'Thuzad replaces Jaina whenever playing with a Mage deck. Kel'Thuzad comes with his own portrait, emotes, and hero tray art, as well as featuring a special animation when using Kel'Thuzad's Hero Power, Fireblast (or its upgraded version, Fireblast Rank 2).

When viewed in the Collection, Kel'Thuzad has the following flavor text:

From Archmage to Archlich, Kel'Thuzad defies convention. Conventions like, "staying alive" or "being nice." 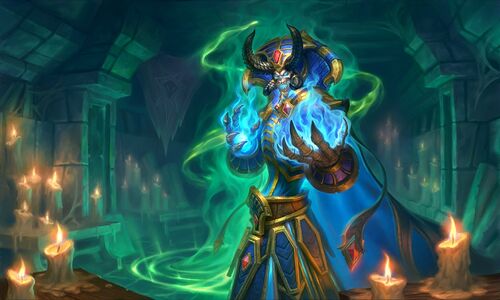