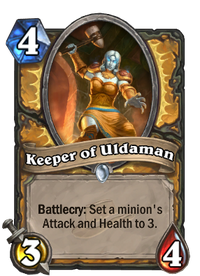 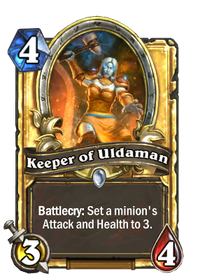 Battlecry: Set a minion's Attack and Health to 3.

Keeper of Uldaman is a common paladin minion card, from the League of Explorers set.

Two copies of regular Keeper of Uldaman are obtained by completing the paladin Class Challenge in The League of Explorers, unlocked upon completing the adventure's second wing, Uldaman.

As a Wild format card, both regular and golden versions of Keeper of Uldaman can also be crafted for the following amounts:

A powerful card that can be used to improve your weaker minions (like Silver Hand Recruit) or weaken your enemies' big threats, but keep in mind that the Battlecry is not optional (unless there are no minions on either side of the board) and you may be forced to buff one of your opponent's minions, or weaken one of your own.

Keeper of Uldaman can be followed immediately with Hammer of Wrath to kill the 3-Health minion; or the Keeper can kill it the next turn and survive at 1 Health.

Summon
None may steal our secrets.
Attack
Not in my house.
Death
The Makers....

Ironaya is a level 39 elite mini-boss found in the Map Chamber in Uldaman. Ironaya tries to guard the secrets of Uldaman from curious adventurers.