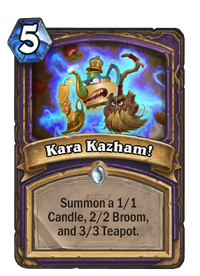 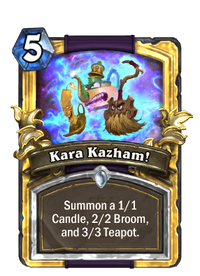 This is what happens when you tell Khadgar to set the table.

Kara Kazham! is a common warlock spell card, from the One Night in Karazhan set.

Two copies of regular Kara Kazham! are obtained by completing the warlock Class Challenge in One Night in Karazhan, unlocked upon completing second wing, The Opera.

As a Wild format card, both regular and golden versions of Kara Kazham! can also be crafted for the following amounts: 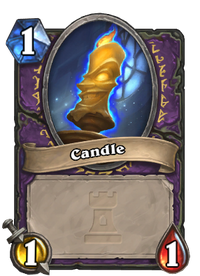 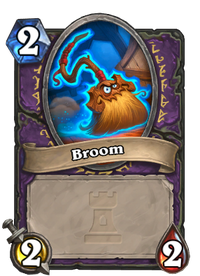 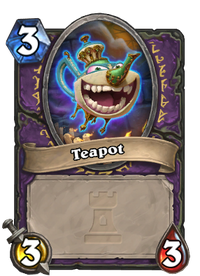 This is a card that can be used to add some mid-game value to a Zoo deck, providing multiple bodies for just a single card. However, since the Warlock's Hero Power provides easy card draw, most Zoo decks prefer the flexibility of multiple smaller cards.

This spell appears to depict the enchantment of Karazhan's various housewares, turning assorted domestic objects into some surprisingly dangerous minions. It also corresponds with the Beautiful Beast Opera encounter in the Return to Karazhan instance, which includes Babblet the broom, Luminore the candle, and Mrs. Cauldrons the kettle as enemies. (The latter instance was not added to World of Warcraft until several months after the release of One Night in Karazhan, but liaison between the two games' developers may have influenced one or both games.)