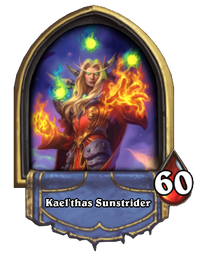 If you're not afraid, you fail to understand the gravity of the situation.

Kael'thas Sunstrider is a boss encounter found in the Trial by Felfire challenges. It is the third boss of The Slithery and the Surly and the eighth boss of the challenges. 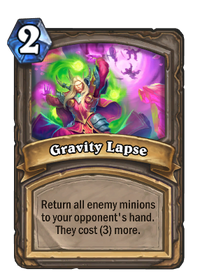 Energy. Power. My people are addicted to it... a dependence made manifest after the Sunwell was destroyed.

No one can stop me now! Selama ashal'anore!
Ah, Jaina. How did we come to this? (vs. Jaina Proudmoore)
Illidan!? Indeed, you ARE the betrayer! (vs. Illidan Stormrage)
Prince Arthas. We have unfinished business. (vs. Prince Arthas)
Liadrin! It is not too late for us to work together! (vs. Lady Liadrin)

I'm the one who gives the speeches around here!

Now, you will taste true power!
Fire consume you!
None spare the flame!
Know my fury!

I've waited for my revenge. I will continue waiting.
A reprieve, then? Granted. Ahaha.
I never do tire of making speeches. Would you like to hear about the Sunwell again?

Your world is upside down!
Having trouble staying grounded?

By the power of the Sun!

A pitiful attempt. To be expected.

Arthas... you took everything from me. I will destroy you!

You can't just... counter my spells. That isn't fair!

Kael'thas Sunstrider was the Prince of Quel'Thalas, the last of the Sunstrider dynasty, as well as a senior member of the Kirin Tor. After the fall of Quel'Thalas, Kael'thas led what remained of his people, the sin'dorei, in the service of the Alliance. Striving to placate his people's addiction to magic, he later covertly allied with Illidan Stormrage, but betrayed him to the Burning Legion when its master, the demon lord Kil'jaeden, enticed Kael with the promise of salvation for the blood elves.

He was branded a traitor after his allegiance to the Legion was revealed, losing the support of Quel'Thalas. Defeated in the Tempest Keep, he would be brought back by his demon masters and return to Azeroth a shadow of his former self. Kael'thas' purpose was to summon Kil'jaeden through the Sunwell, but his plans were foiled by the Shattered Sun Offensive agents and the sacrifice of Anveena Teague. He was defeated by their forces in Magisters' Terrace.

His soul was confined to the plane of Revendreth within the Shadowlands for his misdeeds.