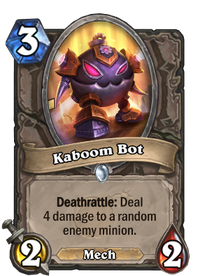 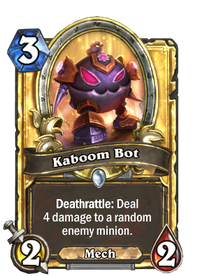 More Boom for your buck.

Kaboom Bot is a common neutral minion card, from The Boomsday Project set.

Kaboom Bot can be obtained through The Boomsday Project card packs, or through crafting.

Kaboom Bot is a cheap Deathrattle minion comparable to Volatile Elemental as a cheap removal minion, but just with 1 added to all numbers and as a Mech. It is also comparable to a delayed, cheaper Bomb Lobber.

With its extra 1 Health, it can survive effects such as the AOE part of Swipe, Mage's Fireblast, and Warrior's Whirlwind. Its Mech tag also gives it utility with Fireworks Tech.

Kaboom Bots are unique to Hearthstone. They are evidently a more powerful version of Dr. Boom's signature Boom Bot constructs.