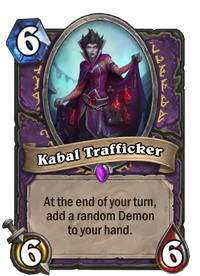 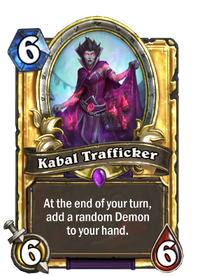 At the end of your turn, add a random Demon to your hand.

She ships illicit mana crystals around the world in packages marked: FUNNEL CAKE.

Kabal Trafficker is an epic warlock minion card, from the Mean Streets of Gadgetzan set.

Kabal Trafficker can be obtained through Mean Streets of Gadgetzan card packs, or through crafting.

Kabal Trafficker can provide cheap card advantage for the Warlock, adding potentially useful minions to your hand without drawing extra cards. Even if removed immediately, its effect will always trigger once. Most demons aren't very powerful, but even poor cards like Blood Imp and Street Trickster can find some use, especially when added to your hand for free. The random demon also has a chance to be an incredible card like Lord Jaraxxus.

The Kabal Trafficker itself is also a solid body, and its effect makes it a viable soft taunt.