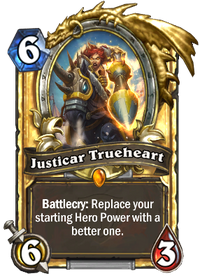 Battlecry: Replace your starting Hero Power with a better one.

It's like putting racing stripes and a giant spoiler on your hero power.

Justicar Trueheart is a legendary neutral minion card, from the Grand Tournament set.

Justicar Trueheart can be obtained through The Grand Tournament card packs, or through crafting.

Example: A hunter with the Armor Up! Hero Power obtained through Sir Finley Mrrgglton plays Justicar Trueheart. The Hero Power will be upgraded to Tank Up!, not Ballista Shot.

Example: A player with enough mana can use a basic Hero Power, play Justicar Trueheart and then use the upgraded Hero Power, all in one turn.[3]

This is a strong card for control decks. By improving the base Hero Power for the rest of the match you can take advantage of the Hero Power it provides each turn after you play it. For Inspire decks this may improve further if they have Garrison Commander. The downside is you take a tempo loss by playing this card due to its 3 Health. More often than not, your enemy will have an easy time destroying it.

Justicar Trueheart in World of Warcraft

Justicar Mariel Trueheart is a human quest giver and starts the primary quest chain for questers wishing to participate in the Argent Tournament. She can be found in the western portion of the Argent Tournament Grounds inside the Argent Pavilion. Before the Coliseum was constructed she originally was standing on the floor; she now stands guard mounted on top of an Argent Charger.

Trueheart also directs players to the pavilion to begin their journey as jousters for faction.