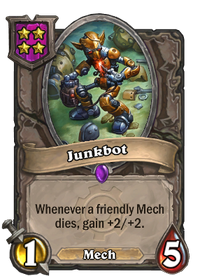 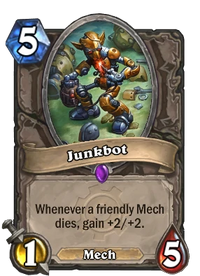 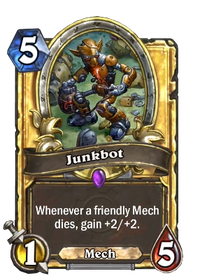 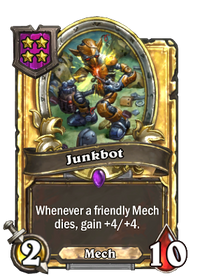 Junkbot is a Tier 4 minion in the Battlegrounds game mode.

Junkbot is a pretty good scaling mech minion in the Battlegrounds. It's still can be a threat since mechs have many minions that spam out Mech tokens, such as Replicating Menace, Harvest Golem and Security Rover, which can heavily feed this card's stats over the course of combat. These minions also enable Deflect-o-Bot to repeatedly gain Divine Shield, as such it is recommended to purchase both minions along with the previously mentioned mechs.

It is best to place this minion on the very right side of your board so that it doesn't attack before receiving buffs and kept at least one slot away from your Taunts to prevent a minion with cleave from killing this minion too early, and for the same reasons it should never be given Taunt.

If your upcoming opponent has reached Tavern Tier 6, the enemy may have Zapp Slywick to kill this minion as soon as the round starts. To avoid this, consider buffing Junkbot with Screwjank Clunker to have more attack than at least one other minion on your board. If you're unable to buff this minion to be initially stronger than one of your existing minions, try to find Deadly Spore. Also Micro Mummy is normally easy to find and it will take both hits from Zapp Slywick, though this will require you to give up a minion slot. Alternatively, if you are at Tier 6, Maexxna will make quick work of Slywick.