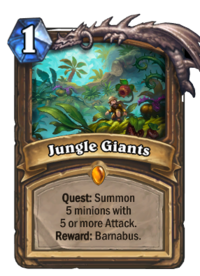 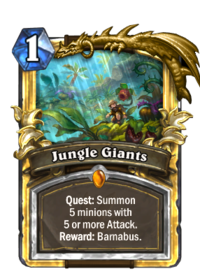 Forming the Golakka Crater was the end of Barnabus' disastrous career as a dancer.

Jungle Giants is a legendary druid spell card, from the Journey to Un'Goro set.

Jungle Giants can be obtained through Journey to Un'Goro card packs bought through the ingame Shop, purchased online from the Battle.net shop, or through crafting. 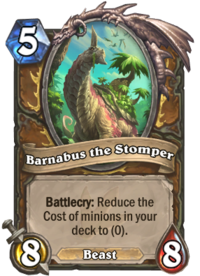 As straightforward as this quest and its reward may be, it may be the most difficult quest to make actual use of. Assuming that you summon one 5-attack minion each turn, starting with turn three, you will finish this quest by turn seven and summon Barnabus by turn eight, then draw your first discounted minion by turn nine. By then, you already have enough mana to cast virtually any card in your deck. In other words: This quest is only useful if your deck intends to do things that cost more than ten mana. On the other hand, it allows you to do just that, so if you plan your deck accordingly, the payoff can be tremendous.

Two cards that can be useful for hastening this quest's progression are Cursed Disciple and Generous Mummy, as both are essentially two 5-attack minions for the price of one. They are also both recruitable with Oaken Summons, which therefore can be of use both before and after Barnabus is played.

The real benefit of having your minions cost nothing is that you can play as many of them in one turn as you like, creating a huge tempo-advantage. If your strategy only relies on topdecking, you will not make any use of your quest reward, since you can only play one card a turn (which you can play anyway as established before). With this in mind, Jungle Giants is suited best for a deck with lots of draw-effects. Nourish and Ultimate Infestation are an obvious choice, but card-draw-effects on minions are also worth considering. Ancient of Lore is especially useful because it also helps fulfilling the quest in the first place. Druid Recruit cards like Grizzled Guardian can Recruit the minions with reduced cost, giving them substantially more value.

The longneck Barnabus is unique to Hearthstone.