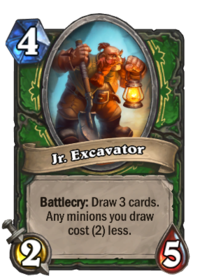 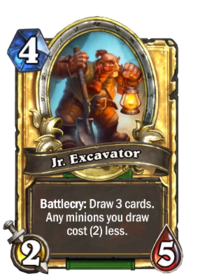 A good explorer's got to start somewhere - and this one is starting with digging. Lots of digging.

Jr. Excavator is an uncollectible hunter minion card used in Tombs of Terror. It is one of Brann Bronzebeard's signature treasures.

Jr. Excavator is unlocked by defeating a Plague Lord. If the player defeats the first four Plague Lords with Brann Bronzebeard, it will be upgraded to Sr. Excavator. 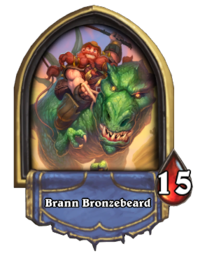 Summon
I fink I found somefing.
Attack
Hands off.