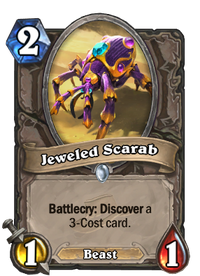 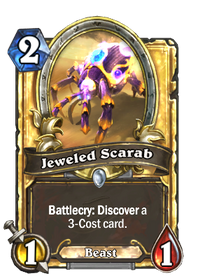 It's amazing what you can do with super glue!

Jeweled Scarab is a common neutral minion card, from the League of Explorers set.

Two copies of regular Jeweled Scarab are obtained by defeating Zinaar, the first boss in The League of Explorers's first wing, the Temple of Orsis.

As a Wild format card, both regular and golden versions of Jeweled Scarab can also be crafted for the following amounts:

This card loses you tempo (low stats) in order to give you card advantage. If played on curve its Discover effect lets you pick a good card for your turn 3.

Various scarabs in World of Warcraft resemble the Jeweled Scarab. Those specifically bearing jewels include the Amethyst Scarab, Turquoise Scarab, and Emerald Scarab, all found in Uldum, the location of the Temple of Orsis.

More specifically, Jeweled Scarabs are mobs found in the Halls of Origination.