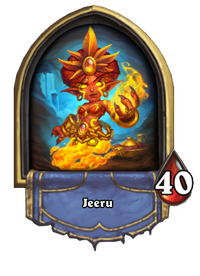 Don't rub the lamp! You rubbed the lamp, didn't you?

Jeeru is a boss that can be encountered during the Dungeon Run.

Mull for a low curve, and avoid keeping any card draw, as Jeeru will be giving both combatants uncontrolled card draw. Play as aggressively as possible to avoid overdrawing.

It is entirely possible for both Jeeru and the player to run out of cards before the match is over, up to the point where both are taking large amounts of fatigue damage. Remember that her Hero Power must finish resolving before deciding the outcome of a match, so it's very likely that both she and the player will be in negative life from fatigue damage. Don't fret if that happens - getting a tie in a Dungeon Run will not end your run, and will simply match you with another boss.

Despite her hero power’s strength, Jeeru's deck has very poor synergy with it. She'll never manage to play most of her cards, and the few that she will play will often be more beneficial towards you than her. Aside from the above case of both players overdrawing to death, Jeeru is often times a free win as long as you can make even a half-decent board presence quickly.

Jeeru
Your wish is my command... For a price...

Jeeru
You'd waste a wish on that?

Jeeru
Be careful what you wish for.
Heheheh.
Too much to handle?

Jeeru
Was that not everything you asked for...?

Jeeru is unique to hearthstone. She is a Djinn.

A djinn is a type of powerful air elemental that can be found in Skywall.