For the minion card of the same name, see Jandice Barov.

Jandice Barov is a hero that the player can pick in the Battlegrounds game mode. 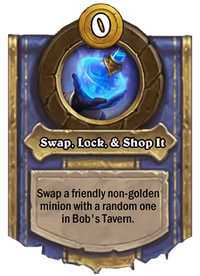 Jandice's Hero Power has similar strengths as Malygos', where she can trade a weaker token minions with a better statted minion for a stronger early game, but more predictably than Malygos since you know what minions you could obtain. You could also use her Hero Power to chain a minion's Battlecry twice, although this is less cost efficient than Shudderwock but sometimes irrelevant in case of Kalecgos, Arcane Aspect so it's better to use in start of game (when Alleycat or Murloc Tidehunter may give a Triple Card at turn 2, if they were bought at first turn) or in Elemental build. Another use with her Hero Power is to temporarily swap out a minion, sell whatever minion that gets swapped with it, and use the extra space to play Battlecry minions to buff your minions before buying back the swapped minion, which makes optimizing a full 7-minion warband more reliable.

Usually, before using the Hero Power, it is better to first buy all the minions you want to play (battlecries, demons, etc.). Such tactics (not counting the combat builds listed below) can increase the chances of getting a Freedealing Gambler or can be used to greatly reduce a cost of Tavern Tiers using Deck Swabbie. However, if you would get a triple reward after using the Hero Power and you are not playing at the low Tavern Tier, it is advisable to upgrade the Tavern Tier and then immediately use the Hero Power (before sell-buy process).

1) Jandice most well-played with Elemental build The elemental build is easily able to create a larger board than with retired Pogo-Hoppers, thanks to more buffs. The huge board is provided by Stasis Elemental and Tavern Tempest, playing in synergy with Molten Rock, Nomi, Kitchen Nightmare, or Lieutenant Garr. Constantly using a hero power on one of these two minions, Jandice Barov is able to enormously strengthen her board in one Recruit Phase due to several guaranteed elementals, which will always give a certain synergy. For obvious reasons, it is very desirable to have Brann Bronzebeard in this build.

2) Another strategy is based on Annihilan Battlemaster that can be used to stack a massive amount of Health, although it's not as consistent as Elementals. For best results, it is advisable to have Wrath Weaver and optionally Mal'Ganis on the board. When playing with demons, Jandice, unlike other heroes, is significantly less dependent on the randomness of refreshing Bob's Tavern when looking for demons.

3) Jandice is also quite capable of playing with beasts, but the end results are rarely as huge or successful as the strategies above. To realize the hero power, you need to get Mama Bear or Pack Leader, then swap a chosen beast and buy it again. The best targets are Cave Hydra and Maexxna.

4) Amalgadon is another good option, which you can use to reuse its Battlecry to try and get better Adaptations if you didn't roll one, or just stack extra Adaptations on it for stat buffs if you have the right team setup for it.