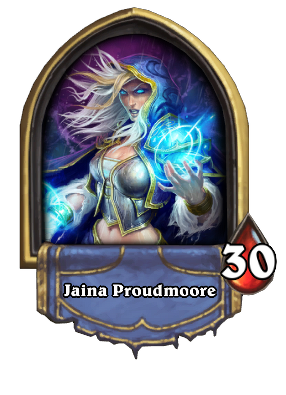 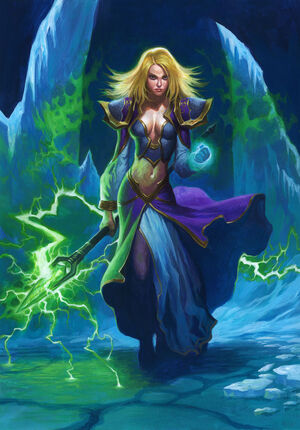 One of the most powerful magic-wielders on the face of Azeroth and Princess of Kul Tiras, the once kindhearted and compassionate Jaina Proudmoore has mastered the arcane arts, fought against demons of the Burning Legion and the undead Scourge, and gained a newfound fury towards the Horde after the destruction of her beloved Theramore.

As a child, Jaina showed great aptitude for magic and much compassion for her people. She was sent to Dalaran—a powerful kingdom and a haven for magi—to learn how to harness the powers of the arcane. The leader of the Kirin Tor, Archmage Antonidas, sensed great potential in Jaina and accepted her as a pupil. Studious and talented, Jaina immediately took to the arcane arts. Her studies and responsibilities consumed most of her waking moments, leaving little room for mundane pursuits.

Jaina’s childhood friend, the Crown Prince of Lordaeron Arthas Menethil, reentered her life during her training in Dalaran, and the two fell in love. However, Jaina’s rigorous studies and Arthas’s duties to his kingdom prevented their relationship from ever becoming more than a brief dalliance, and their relationship ended abruptly. Heartbroken, Jaina returned to the comfort of her studies.

Years later, a terrible plague washed over Lordaeron. Suspecting this was no ordinary sickness, Archmage Antonidas sent his prized pupil to meet with Arthas to investigate the cause. The plague, originating from infected grain, was spreading over the region like wildfire. It twisted the townsfolk into undead abominations of their former selves. The towns of Brill and Andorhal had completely succumbed to the plague, and Jaina knew she had to seek reinforcements. 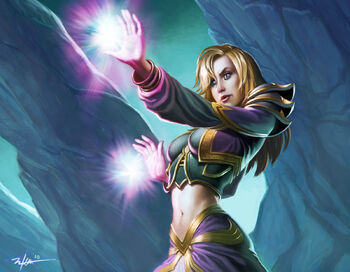 Jaina returned with help in the form of Uther Lightbringer and the Knights of the Silver Hand. Sadly, they were too late; the people of Stratholme had eaten the grain and would soon fall prey to the plague. Arthas pressed to eliminate the people of Stratholme before they became undead—Jaina was horrified by the idea and Uther adamantly refused to have a hand in such a barbaric act.

Knowing there was little hope for Stratholme, Jaina bravely gathered survivors and fled Lordaeron. Ultimately, her actions saved thousands. Sailing west, Jaina and her refugees arrived on the shores of Kalimdor... only to discover that orcs had claimed those lands for their own.

Seeking a safe haven for her people, Jaina valiantly fought off Kalimdor’s Horde, but soon became aware of a greater threat. A mysterious prophet led to Jaina and her people joining forces with the Horde and the night elves to defeat the demon Archimonde at Mount Hyjal. After quelling this threat, Jaina finally found a new home for her refugees on an island off the eastern coast of Kalimdor, which she named Theramore.

As Jaina helped the refugees rebuild, the tensions between her people and the Horde slowly resurfaced. To ensure the safety of her people, Jaina forged an alliance with Thrall, the Warchief of the Horde. These issues only increased when the Horde’s Champion, Rexxar, claimed that humans were sent to assassinate him. Jaina knew nothing of this assassination attempt, but offered to assist Rexxar in discovering who was truly behind the attempts on his life. 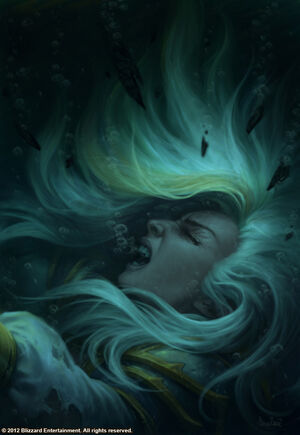 To her dismay, Jaina soon discovered that her father, Lord Admiral of the Alliance Daelin Proudmoore, was behind the attempt on Rexxar’s life. Daelin held a long-standing, deep-rooted hatred for the Horde, and would stop at nothing to see them wiped from the face of Azeroth. Jaina pleaded with her father to stand down and leave the orcs be, fearing his interference would further endanger Theramore’s people, but he would not relent. Daelin and his forces faced off against Rexxar and the Horde in combat, but they were no match for the Horde’s numbers and ferocity. Daelin was slain by Rexxar, and Jaina grieved, wishing her father would have listened to her council.

After her father’s death, Jaina maintained the uneasy alliance between Theramore and Orgrimmar, knowing that the combined might of an allied force was more powerful against potential threats than a people divided. That alliance was invaluable when the Scourge rose up in the icy continent of Northrend. A terrifying echo of her past led the undead forces—Arthas Menethil, now the Lich King. Jaina was determined to save her former love from the curse that gripped him, but it seemed like there was nothing left of the Prince of Lordaeron. Nevertheless, Jaina assisted in leading Alliance forces into the heart of Northrend to purge the land of this encroaching evil. Once their forces were victorious, a search of the Lich King revealed a small token, providing Jaina with hope that some remnant of the Arthas she once loved remained—a locket she had bestowed upon him in days long past.

When the leadership of the Horde was bequeathed to Garrosh Hellscream, the new Warchief took it upon himself to swiftly and brutally eliminate the Alliance presence on Kalimdor, starting with Theramore. Garrosh’s forces developed a mana bomb that he dropped upon the unsuspecting city, swiftly and brutally wiping Theramore off the face of Azeroth. Countless lives were gone in an instant. Jaina barely survived the blast, but she would be changed forever; her hair and her eyes became stark white, and her outlook towards the orcs and the Horde changed from peaceful and understanding to ruthless, brutal, and cold.

Now the leader of the Kirin Tor, Jaina’s recent aggression towards the Horde is far from unfounded. Jaina Proudmoore’s raw magical power and simmering fury should not be underestimated.[1]

When viewed in the Collection, Jaina has the following flavor text:

The Kirin Tor’s leader is a powerful sorceress. She used to be a lot nicer before the Theramore thing. 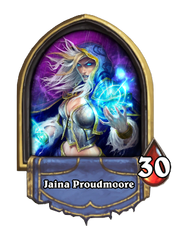 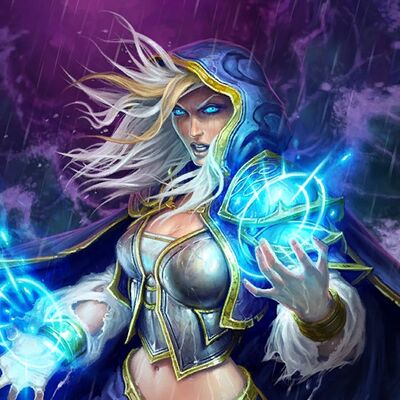