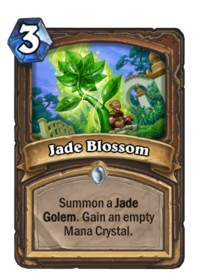 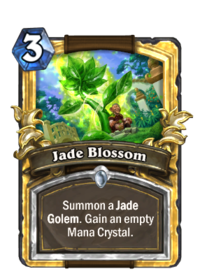 Meditating under a jade blossom is said to grant you wisdom, unless you have a pollen allergy.

Jade Blossom is an common druid spell card, from the Mean Streets of Gadgetzan set.

Jade Blossom can be obtained through Mean Streets of Gadgetzan card packs purchased online from the Battle.net shop, or through crafting. 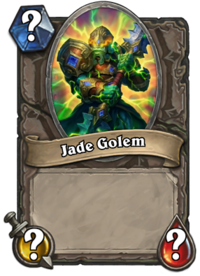 Jade Blossom is similar to Wild Growth. It helps Jade Idol Druid first by gaining an empty Mana Crystal, which means that you will be able to play cards that summon Jade Golems faster. Secondly, it summons a Jade Golem, which helps you in summoning big Jade Golems faster than usual.

If you go second, a very powerful combo that will both increase a lot of your empty Mana Crystals and get you a lot of cards is The Coin into Wild Growth on turn one, Jade Blossom on turn two, and Nourish to draw cards on turn three. Because you cast so many spells you would normally be behind on the board, but Jade Blossom develops a 1/1 which is enough to kill one of most early game minions used by aggro decks. Even though you went second, you will be two Mana Crystals ahead and have drawn four more cards.

All in all, Jade Blossom is a strong include in Jade Druid decks and even though it is decent by itself, combining it with other cards such as Innervate, Wild Growth and Nourish can get you really far ahead of your opponent in three to four turns.