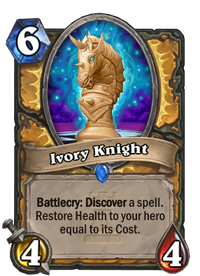 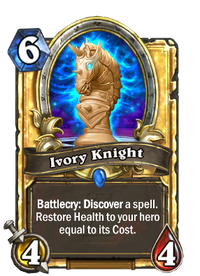 Battlecry: Discover a spell. Restore Health to your hero equal to its Cost.

Ivory Knight is a rare paladin minion card, from the One Night in Karazhan set.

Two copies of regular Ivory Knight are obtained by defeating the Chess event, the third encounter in One Night in Karazhan's first wing, The Parlor.

As a Wild format card, both regular and golden versions of Ivory Knight can also be crafted for the following amounts:

A strong choice for a control-oriented deck; while the minion's stats are sub-par for its cost, the heal provides some immediate benefit and the Discovered spell offers great flexibility.

Your opponent might know which spell you have chosen, judging by the amount of Health restored to your hero. For example, (as of the Year of the Mammoth Standard) the only 6 mana Paladin spells are Avenging Wrath and Spikeridged Steed, and the only 8 mana spell are Lay on Hands and Dinosize. However, if only missing a few Health points, you can pick a more expensive spell and leave the opponent guessing as the amount healed won't go over your hero's maximum Health.

Dwarven Archaeologist provides a reduced cost, but not a reduced healing, since the two phases are separated.

Strong Battlecries should be re-used again with a Getaway Kodo.

You can deal self damage with Bloodclaw, then heal yourself with him. This will allow a maximum of 5 Damage if you have a Blackguard.

Ivory Knight's strength lies in his "turning the table" effect and is another strong effect to abuse. The Glass Knight will recover her Divine Shield, while Blackguard will deal a little to heavy damage. The Healing effect can instantly reinforce Zandalari Templar and upgrading Lesser Pearl Spellstone. It may provide an extra buffing spell for Lynessa Sunsorrow or Galvadon or a strong area damage like Avenging Wrath. A New Challenger will provide a nice healing amount and a good damage wall.

A discover with healing effect can be greatly strengthened by Brann Bronzebeard. Double cards and double heal.