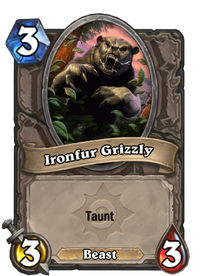 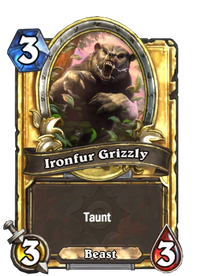 Ironfur Grizzly is a neutral minion card, from the Basic set.

Two copies of Ironfur Grizzly are automatically included in all players' collections upon unlocking the hunter class.

Two Golden copies of Ironfur Grizzly are a reward for raising a hunter to levels 59 and 60.

Ironfur Grizzly is uncraftable and cannot be crafted or disenchanted. 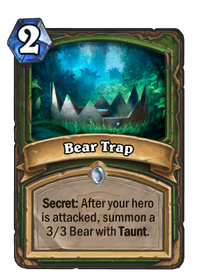 The Grizzly is a useful 3 mana 3/3 Taunt. It is the cheaper version of the Sen'jin Shieldmasta, a 4 mana 3/5 taunt. The Grizzly has the advantage of being slightly cheaper, but is far less survivable.

The main advantage possessed by the Grizzly over other taunt minions is that it is a Beast card, offering synergy with hunter cards such as Starving Buzzard and Scavenging Hyena. It works especially well with the Scavenging Hyena since the opponent's minions are forced to attack Ironfur Grizzly, giving Scavenging Hyena higher stats.

If used by a Warrior, Fierce Monkey should be the preferred card over the Grizzly, as it has 1 more Health. If Beast synergy is not a factor, then Hired Gun is superior to it, which has 1 more Attack.

"Ironfur" is a designation given to a number of bears found in Feralas. The name may be a reference to the colour of these gray bears' coats, or their toughness.