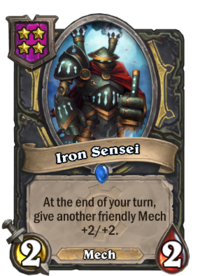 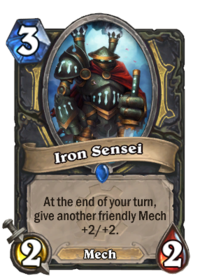 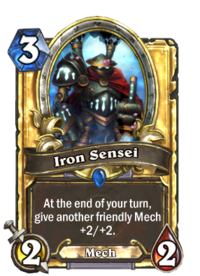 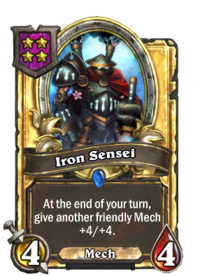 At the end of your turn, give another friendly Mech +2/+2.

Iron Sensei is a tier 4 minion in the Battlegrounds game mode.

At first glance, Iron Sensei may seem like an underwhelming tier 4 minion, with subpar stats and a singular buff - however, if he is bought early, this minion can easily snowball out of control. Since his effect activates at the end of each Recruit Phase, he will provide long-term value for a Mech warband, and, given the right targets, can sometimes be as effective in the long run as a Lightfang Enforcer. It can be a good idea to concentrate buffs onto a single high-value target such as a Deflect-o-Bot, though one should not underestimate the value of spreading out buffs among multiple powerful minions either. Some good targets for his buff include Junkbot, Mechano-Egg, Security Rover, and of course Deflect-o-Bot.

Being himself a Mech means that he works naturally with Mech-related synergies like Replicating Menace and Annoy-o-Module, though his weak base stats make him a less desirable target for these ; they do signify, however, that he can be used to disrupt Cleave attacks effectively.

Beware when having two of these on the board, as an Iron Sensei can buff another Iron Sensei, which is generally undesirable if trying to buff stronger Mechs. 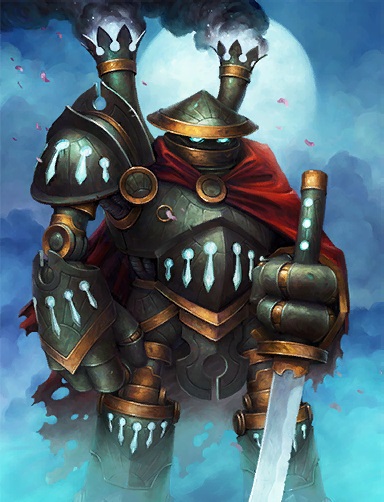