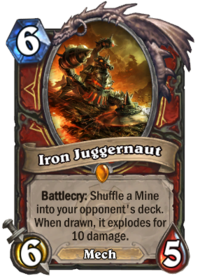 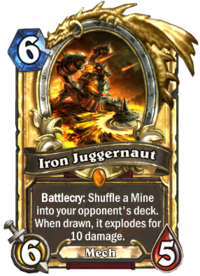 Battlecry: Shuffle a Mine into your opponent's deck. When drawn, it explodes for 10 damage.

The Iron Juggernaut guards Orgrimmar and has just earned the "Employee of the Month" award!

Iron Juggernaut is a legendary warrior minion card, from the Goblins vs Gnomes set. Its Battlecry generates a Burrowing Mine and shuffles it into the opponent's deck.

Iron Juggernaut can be obtained through Goblins vs Gnomes card packs purchased online from the Battle.net shop, or through crafting. 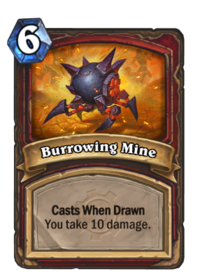 This card's effect gets stronger the longer the game does on, since the chance of drawing the Burrowing Mine increases as well. This applies even against decks that can shuffle more cards into their decks.

Otherwise this card is not so good in the middle of the game, because of the poor stats for a 6 mana cost, and because of the low probability of getting the mine for your opponent before the game ends. This makes it more valuable for decks which intend to take the game to fatigue, or close. Decks seeking quick victories will often end before the Burrowing Mine can be drawn, making this a poor choice.

Iron Juggernaut is a strong target for cards that can use its Battlecry multiple times, such as Brann Bronzebeard, and return effects like Youthful Brewmaster, Time Rewinder or Dream, or even Dead Man's Hand, allowing the player to repeatedly add Burrowing Mines to the opponent's deck. The huge amount of damage from Burrowing Mine makes it very difficult for decks without large amounts of healing or armor to survive over time.

Burrowing Mine can be an effective way of defeating a mage using Ice Block. Since secrets can only activate on the opponent's turn, provided the Mine is drawn on the mage's own turn, Ice Block will not be activated, and so will not prevent the damage.

Iron Juggernaut is the sixth boss of Siege of Orgrimmar. Created by Siegecrafter Blackfuse, this robotic scorpion guards the gates to the city of Orgrimmar. After it destroys the Darkspear Rebellion's siege weaponry and reserves, the players must destroy the Iron Juggernaut to allow the rebellion into the city. 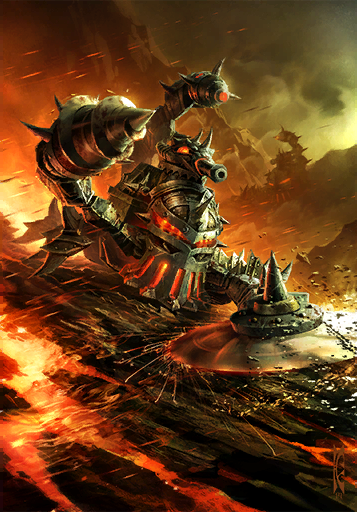