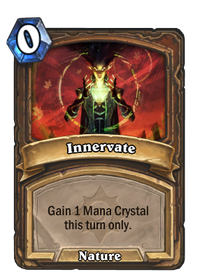 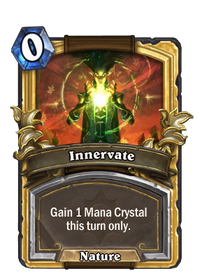 Gain 1 Mana Crystal this turn only.

Some druids still have flashbacks from strangers yelling "Innervate me!!" at them.

Innervate is a druid spell card, from the Basic set.

Two copies of Innervate are automatically included in all players' collections upon unlocking the druid class.

Two Golden copies of Innervate are a reward for raising a druid to levels 36 and 38.

Innervate is uncraftable and cannot be crafted or disenchanted.

Innervate will be a part of the upcoming Core set with the following appearance:

Innervate grants the player an extra mana crystal on the turn that it is used. This grants the Druid the potential to use high cost cards a turn or two earlier than expected. Summoning sturdy, powerful minions like Druid of the Claw or a card that ramps up in strength over time like Vicious Fledgling in the first few turns of the game will allow the player to seize board control, often trading for several of the opponent's cards and granting the Druid a sizeable advantage. Simply put, Innervate offers a decent burst of tempo in exchange for card advantage.

However, a notable downside of Innervate is that it is far less useful in the late game when Mana is more plentiful.

While Innervate is unable to increase your Mana crystal pool above 10, it can be used after spending at least 1 Mana to effectively give you 11 crystals for that turn. Unlike Wild Growth, using Innervate with 10 full Mana crystals will not give the player an Excess Mana card.

Innervate is best used in decks with cards that benefit from multiple cheap spells being used, such as Gadgetzan Auctioneer, Arcane Giant, and Yogg-Saron, Hope's End.

Innervate is a druid spell that causes the target to regenerate a substantial amount of mana over 10 seconds. This card shares the same artwork as the Innervate card from the World of Warcraft Trading Card Game.

The card's flavor text refers to a key mana regeneration mechanic from vanilla WoW. Originally the 31 point Restoration talent for druids, a significant portion of a Resto druid's value in raids was to use Innervate to restore mana to other casters. Clearly, this over-specialisation was not appreciated by all druids.