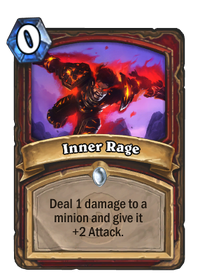 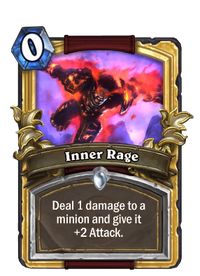 Deal 1 damage to a minion and give it +2 Attack.

They're only smiling on the outside.

Inner Rage is a common warrior spell card, from the Classic set.

Inner Rage can be obtained through Classic card packs, through crafting, or as an Arena reward.

Inner Rage will boost the damage of any minion but works especially well with minions that have Enrage, such as Amani Berserker, Tauren Warrior and Raging Worgen, or minions with Windfury, like Flying Machine or Windfury Harpy. It is a natural combo with Rampage.

Inner Rage + Execute allows you to instantly kill any minion for 2 mana. This is very powerful for taking down an expensive, high-damage minion that would require sacrificing too many of your own minions to kill, a valuable minion behind Taunts, or a Doomsayer which otherwise could not be removed in time. Inner Rage can also be used on its own for a single point of damage on any minion, useful for finishing off a weakened enemy. However, it is usually more valuable when used to increase the Attack of an attacking minion, for at least 2 additional damage.

Inner Rage excels as a combo card with minions like Raging Worgen, with its 0 mana cost allowing its use even in early rounds. However, as a fairly small effect, it is often a weak draw outside of the right situations, especially in the later game and when the player's drawing ability is limited.

An extreme example of the potential value of this zero-mana card might be using Inner Rage to Enrage Spiteful Smith while having a weapon equipped, before then playing Bloodsail Raider. Not only does Spiteful Smith get +2 Attack, the weapon gets a +2 Attack buff as well, which in turn grants an additional 2 Attack to the Bloodsail Raider through its Battlecry.

Inner Rage can also be a useful way to remove Divine Shield from an enemy target, although the +Attack buff will still be granted. Whenever using it to deal damage to an enemy target, the player should always take care to consider order of play, in order to prevent avoidable damage from friendly minion or hero attack. 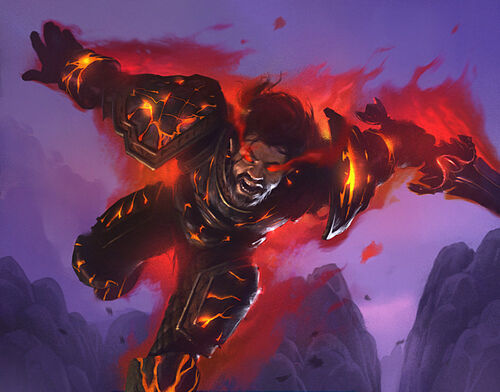