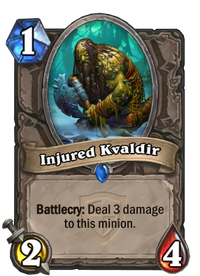 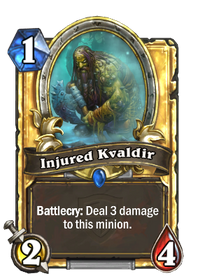 Battlecry: Deal 3 damage to this minion.

Don't worry. With a little skin cream he's going to clear right up.

Injured Kvaldir is a rare neutral minion card, from the Grand Tournament set.

Injured Kvaldir can be obtained through The Grand Tournament card packs, or through crafting.

A cheaper version of Injured Blademaster, the same strategy tips apply: heal it with Ancestral Healing or use it in a priest deck. After the Battlecry has been activated you are left with a minion that has just 1 Health, so it is best to immediately heal it, making it harder for your opponent to remove. Alternatively, as a turn 1 drop in a warrior deck it makes a perfect target for a second-turn Rampage, as well as providing an easy source of an extra card draw when combined with Battle Rage.

This card works well with Desert Camel or Skydiving Instructor, whose Battlecry lets the Injured Kvaldir enter the battlefield without activating his Battlecry.

Summon
I'll take you down with me!
Attack
Breathe your last!