Infinite Toki is a hero that the player can pick in the Battlegrounds game mode. 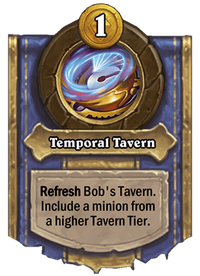 Infinite Toki's hero power gives her reliable access to minions above her Tavern Tier, letting her easily hit power spikes in the early game. A minion that's one tier higher will almost always be stronger than whatever else you have available early on. As such, she can afford to be less aggressive with her Tavern upgrades than most heroes, and upgrading to Tier 6 is generally optional as Temporal Tavern guarantees at least one Tier 6 minion per turn, whereas regular re-rolls do not.