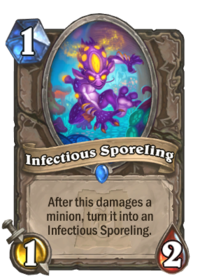 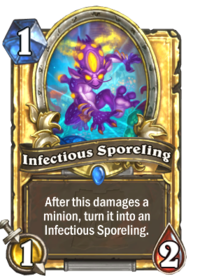 After this damages a minion, turn it into an Infectious Sporeling.

"The best thing about being me—there’s so many 'me's."

Infectious Sporeling is a rare neutral minion card, from the Ashes of Outland set.

Infectious Sporeling is a solid earlygame choice, serving as a soft Taunt due to its effect, which provides a pseudo-Silence effect. Although it struggles in the mid/lategame, usually you can bait out your opponent's removal with this minion as they will want to prevent it from transforming their bigger minions.