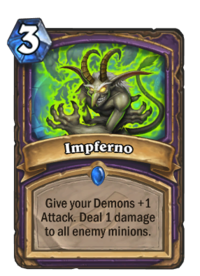 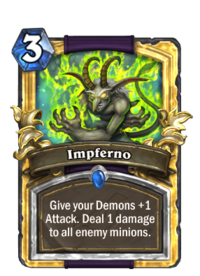 Give your Demons +1 Attack. Deal 1 damage to all enemy minions.

Imps don't get mad when you set them on fire. They think it's cozy.

Impferno is a rare warlock spell card, from the Rise of Shadows set.

This card provides a small amount of chip damage against enemy minions, taking care of small minions like Silver Hand Recruits and Lackeys, as well as powering up your demons, making it more useful in zoo decks that utilize multiple token Demons.

Particularly powerful when combined with Mad Summoner, giving you a 5/4 and a board full of 2/1 Imps while destroying all their Imps.