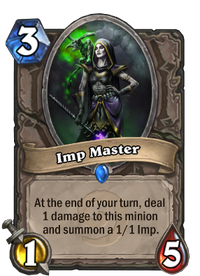 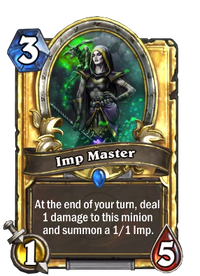 At the end of your turn, deal 1 damage to this minion and summon a 1/1 Imp.

She would enjoy the job a lot more if she just could get the imps to QUIT BITING HER.

Imp Master is a rare neutral minion card, from the Classic set. At the end of each round, it deals 1 damage to itself and summons a 1/1 Imp. 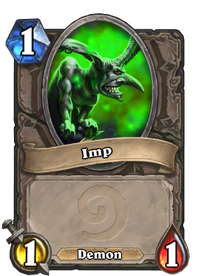 The mechanics of Imp Master work well when the only damage it takes is from its own ability, meaning this card is best paired with a Taunt. In a situation where your opponent does not have a lot of minions it can be very easy to overwhelm them. Paired with buffed damage such as that from Raid Leader or Stormwind Champion, Imp Master and its progeny can deal some serious damage to your opponent and their minions. Flesheating Ghoul and Knife Juggler also works very well with this card, especially if using your Imps to destroy enemy minions.

Healing abilities can be used to prolong the Imp Master's spawning indefinitely, such as the priest hero power Lesser Heal and the shaman totem Healing Totem. Health-boosting effects like Shattered Sun Cleric's battlecry will also extend this.

When facing the Imp Master, it's generally desirable to remove her as quickly as possible. Unless destroyed the same turn she is summoned, she will have already summoned a 1/1 Imp (making her a 1/4) by the time the opponent gets a chance to remove her.

If there is no room to summon an Imp, the damage still occurs.

Summon
*Yawns* I am not a morning person...

Attack
Heheheh, let the dark in. 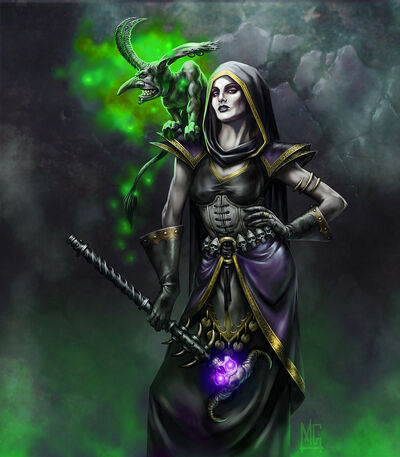