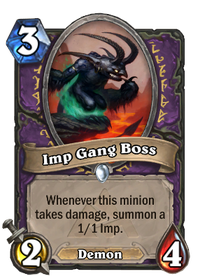 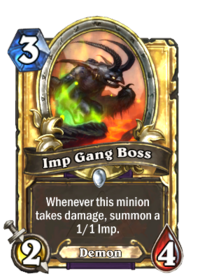 Whenever this minion takes damage, summon a 1/1 Imp.

His imp gang likes to sneak into Stormwind to spraypaint "Ragnaros Rulez" on the Mage Tower.

For the event version of this card, see Imp Gang Boss (Event).

As a Wild format card, both regular and golden versions of Imp Gang Boss can also be crafted for the following amounts: 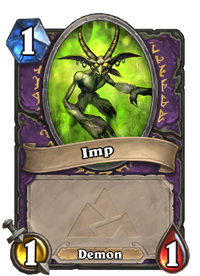 Works best when you can slowly do damage to it, as the 1/1 Imp will be summoned every time it takes damage. Cards like Unstable Ghoul or Dread Infernal can help do damage slowly and effectively. It's also useful if this is your only creature, and there is an opposing Knife Juggler on the board, as it will have a 50% chance of taking damage from each of the Knife Juggler's knives. It's also efficient to use the Imp Gang Boss to trade with opposing 1/1's, such as Silver Hand Recruits made by the Paladin's hero power. More Imps can be made by buffing the minion with Demonfire or Crystalweaver.

It should also be noted that the Imp Gang Boss's power will activate even when it takes fatal damage, resulting in a 1/1 Imp regardless, unless Silenced or Transformed. It can however be removed using destroy effects such as Shadow Word: Pain without producing Imps.

Imps are like roaches. If you see one, there are definitely more nearby, and they’re probably doing things like letting the air out of your tires, changing your computer’s background to something embarrassing, or ’plosioning. It’s even worse when they’re in a gang . . . or SUPER GREAT if they’re on your side.[1] 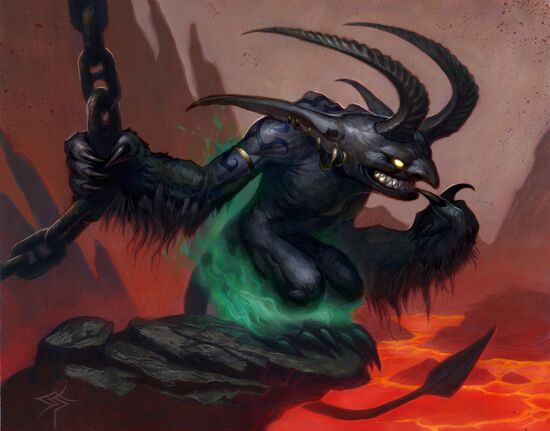