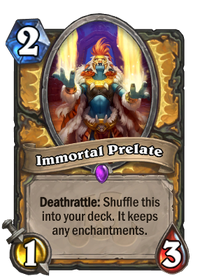 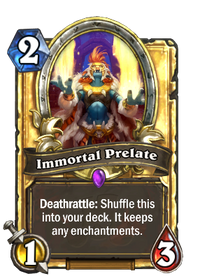 Deathrattle: Shuffle this into your deck. It keeps any enchantments.

She protec.
She attac.
But most importantly,
she come bac.

Immortal Prelate is an epic paladin minion card, from the Rastakhan's Rumble set.

Immortal Prelate can be obtained through Rastakhan's Rumble card packs, or through crafting.

Immortal Prelate is a power curve card. She has a great late game potential, but can be a serious threat even in early stages. Her Deathrattle can delay your fatigue as long as your opponent does not have any hard removal (Polymorph, Silences, "Return to Hand" and The Amazing Reno).

She can keep all kinds of buffs (Rush and Charge whenever is possible, Poisonous, Lifesteal, Stealth, Ressurections, Spell Damage, Taunt, Divine Shield, Hand Buffs and Reborn if it is possible). However, she will not keep cost readjusments. Bonus from Secrets (Never Surrender!, Avenge, Competitive Spirit) works too.

While not being stated, her effect does keep negative effects like Shrink Ray and any other stats readjustment effects.

Since she will always return to your deck, force draws and Recruit are the best options to use along her. The more the better, and, as long as the game keeps going, she will become stronger and harder to dispose. Along with Recruit, you can use Duel! for a force summon. For force draws, consider using Call to Adventure.

You can create several copies of her by using just one Desperate Stand. As mentioned before, she keeps the summoning Deathrattle, adding more Prelates as long as you have the buffed one. A similar effect occurs when combined with Gift of Luminance. Divine Shields will be kept.

Despite her slow initiation, Immortal Prelate is a serious threat that can fit in several kinds of decks. Her effect has a wide variety of very cool interactions. Prelates are very independant cards, that can provide everything (from Lifesteal to infinite buffs), below here will be a list of strong buffs and special interactions that fits specially well with her Deathrattle:

Prelate is a title used for paladin-like warriors among the Zandalari trolls, with the prelates of the devilsaur loa Rezan being the highest order of holy warriors to serve any loa in Zandalari society. Much like overall the association between paladins and Shirvallah, prelates sworn to Shirvallah are unique to Hearthstone.