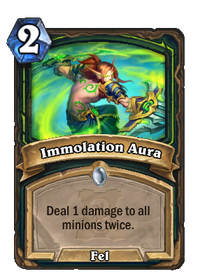 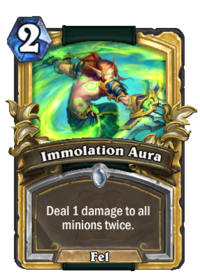 Deal 1 damage to all minions twice.

If you can't take the heat, stop standing in the fire.

Immolation Aura is a common demon hunter spell card, from the Ashes of Outland set.

Immolation Aura can be obtained through Ashes of Outland card packs, through crafting, or as an Arena reward.

Immolation Aura is similar to Volcanic Potion at a lower mana cost. However, since it deals damage in two parts rather than at once, it can be used to finish off 1 health token minions killed in the initial blast, or destroy Divine Shield minions like Scarlet Crusader and Argent Squire.

The main downside of Immolation Aura is demon hunter's heavy Tempo core, limiting the number of decks that can use the effect. It's best suited as a stall card in Combo Demon Hunter.

Immolation Aura originally appeared as Immolation, an ability for the Demon Hunter hero unit in Warcraft III: Reign of Chaos, which engulfs the Demon Hunter in flames, causing damage to nearby enemy land units, and drains mana until deactivated. In World of Warcraft, Immolation Aura is a Vengeance demon hunter ability which engulfs the caster in flames, instantly causing Fire damage to nearby enemies every second for 6 seconds.