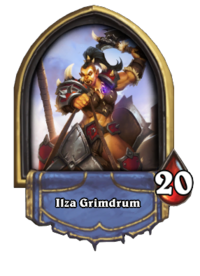 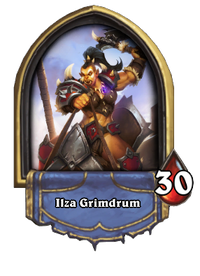 Ilza is an arena champion known as 'The Cruel Dueler.'

Ilza Grimdrum is a boss that can be encountered initially in Chapter 4 of Tombs of Terror. After completing Chapter 4, this boss encounter will be available in any completed chapter.

Ilza Grimdrum
Are you trying to pick a fight? 'Cause I am.
Are you a fighting fish? Or a flying fish? (vs. Sir Finley)

Ilza Grimdrum
Go ahead, rile me up.

Ilza Grimdrum
Fists up!
Get 'em!
Round one!

Ilza Grimdrum
I love fighting. It's just so relaxing!
If you're not mad about something, you're not thinking enough.
Used to be an arena champion, but I wanted to travel more.

Crush you with my bare hands!

Ilza Grimdrum
Guess I'll have to find another brawl...

Ilza Grimdrum is unique to Hearthstone.