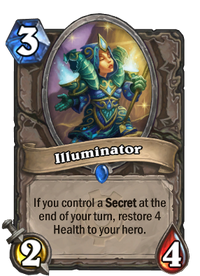 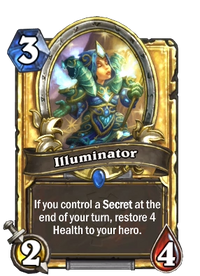 If you control a Secret at the end of your turn, restore 4 Health to your hero.

"LUMOS!" is not what they yell. What do you think this is, Hogwarts?

Illuminator is a rare neutral minion card, from the Goblins vs Gnomes set.

Illuminator can be obtained through Goblins vs Gnomes card packs, or through crafting.

Illuminator is most effective in decks featuring several secrets, and is similar to the Ethereal Arcanist.

Ice Block is a particularly effective secret to use with the Illuminator, especially during the early game, where it will likely remain untriggered for several turns, unless it is removed with cards such as Flare.

Mad Scientist can be useful in combination with the Illuminator, in order to provide a secret to trigger its effect.

One way for Lightwarden to sort of get consistent buffs in non-priest decks.