Whenever you play a card, summon a 2/1 Flame of Azzinoth.

Illidan's brother, Malfurion, imprisoned him beneath Hyjal for 10,000 years. Stormrages are not good at letting go of grudges.

Illidan Stormrage is a legendary neutral minion card, from the Classic set. 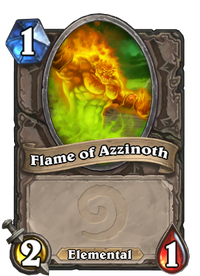 As of Xavius' replacement of Illidan in Ashes of Outland, the above interactions are not possible anymore since Xavius summons his tokens after the card had been fully played, while Illidan summoned his tokens between the card being played and its on-play effect resolving.

Illidan Stormrage is a 6 mana, 7/5 minion which summons a 2/1 Flame of Azzinoth whenever you play a card. This can be used with a combination of cheap cards to fill your board with minions. In opposition, Illidan is a priority target, and should be silenced or destroyed as soon as possible to prevent him from becoming a lingering threat. However, these minions will be unable to act until the next turn, leaving them vulnerable to attack from the opponent. Combined with their 1 Health and Illidan's low Health, it makes him and his minions easily defeated by AoE attacks.

Ideally, you should play multiple cards immediately after playing Illidan to make use of his ability before the opponent has a chance to remove him. This becomes easier if Illidan can be summoned into the battlefield for free, such as through Skull of the Man'ari or Possessed Lackey. If possible, use AoE buffs such as Power of the Wild to bolster the survivability of the Flame minions, reducing the likelihood of the opponent removing them before they have time to act.

Summon
You are not prepared!

Alternative summon (when the enemy hero is Malfurion)
Hello... brother.

Attack
Who shall be next to taste my blades?

Illidan Stormrage was the self-proclaimed Lord of Outland, ruling from the Black Temple. He was born a night elf, and as stated by Maiev Shadowsong, became "neither demon nor night elf, but something more". He was the twin brother of Malfurion Stormrage and was in love with Tyrande Whisperwind. Once an unusually gifted sorcerer, the extent of his powers became difficult to classify due to his powers increasing in large bursts as a demon hunter and having absorbed the powers of the Skull of Gul'dan.

His pursuit of power and arcane mastery led him to commit a number of horrific acts against his own people and the races of Azeroth, including defecting to Sargeras during the War of the Ancients and creating the second Well of Eternity. For his actions, he was imprisoned for ten thousand years, until his release during the Third War. He came to be called the Betrayer for his acts against the night elf people and carried the title of Lord of Outland. Seeking to bring down her erstwhile prisoner, Maiev allied with Akama to invade the Black Temple, where she cornered Illidan in his inner sanctum and struck him down, bringing an end to one of the most tragic stories in Azeroth's history... or so it was once thought.

"I am free after ten thousand years, yet still my own brother thinks I am a villain! I'll show him my true power! I'll show him that the demons have no hold over me!"