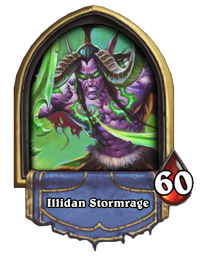 Lord Illidan. The Betrayer. Master of the Illidari. Stop him before he gets another title. 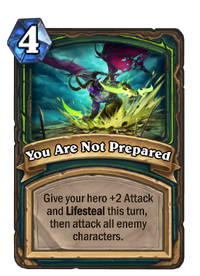 As the final boss of Trial by Felfire challenges, completing this encounter also awards the following card: 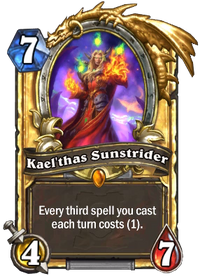 So you've come for me. Very well.

My hatred is unending. I will make short work of you.
Make no mistake Maiev, I will not be shackled again. (vs. Maiev Shadowsong)
Arthas... a rematch, then. (vs. Prince Arthas)

It is too late for bargaining.

Behold the flames of Azzinoth!
Burn! As my hatred does!
This is too easy!
Who will be next to taste my blades?

I have waited ten thousand years. What's a few more seconds?
My blades need sharpening…
You have wasted much of my time, mortal.

Stare into the eyes of the Betrayer!

Now I am complete!

Alas, Gul'dan… your power is mine.

Behold the power… of the demon within!
Feel the hatred of ten thousand years!

You Are Not Prepared

You are not prepared!

I should have slaughtered you and your malformed brethren long ago.