Illidan Stormrage is a hero that the player can pick in the Battlegrounds game mode. 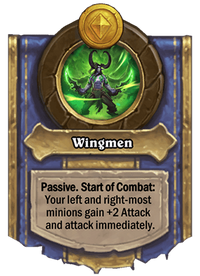 Illidan's Hero Power gives him an early start on attack order for two minions. His Hero Power works best in compositions that highly benefit from attacking first, such as Cave Hydra, Zapp Slywick, and Glyph Guardian benefit the most. Alternatively, Illidan's Hero Power makes Deathrattle minions much more likely to die as soon as possible. It helps ensure a Goldrinn, the Great Wolf or Nadina the Red activate their Deathrattle before the opponent can potentially kill your other minions before their Deathrattles go off. This also means Monstrous Macaw is extremely effective with Illidan, guaranteeing it gets an attack in and activate your other Deathrattles. In the early game, Arcane Cannon also works well with Illidan, who can fire off one or two shots early. Even without those minions, it acts as a pseudo-Windfury for the left-most minion, so having a highly buffed minion be able to attack twice relatively soon can be useful.