From Hearthstone Wiki
(Redirected from Illidan)
Jump to: navigation, search 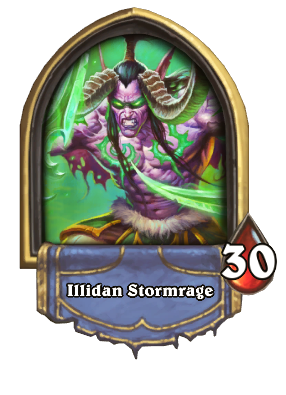 "(laughs) There is a darkness in the garden of the heroes that you know, casting shadows even blacker than the night. There is a prisoner walking free, who still envisions what could be. Though long-ago, he sacrificed his sight. There is a villain who's been hated and a savior who's been shunned, who's tasted of a love that cannot be. They're all one and the same, and the worlds all fear my name. The hero that you never thought you'd see!"[1]

Illidan Stormrage, the newest playable Hero in Hearthstone, embodies the Demon Hunter’s class identity. He’s an aggressive attacker who leads his fel-infused forces into the fray. While other Heroes may buff and heal their minions, Illidan instead fuels himself with their souls when they fall in combat, taking vengeance upon his enemies.[2] 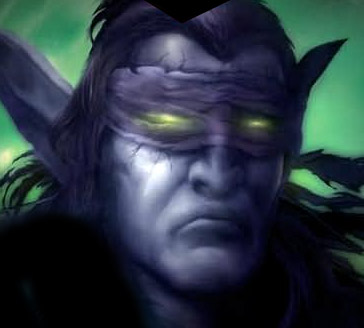 Illidan on the cover of The Sundering

During the Third War and the Legion's second invasion of Azeroth, Illidan was freed from his prison by Tyrande, who believed that he would be a valuable ally in the conflict. However, before battling the dreadlord Tichondrius, Illidan consumed the fel energies of the Skull of Gul'dan, and became a demon. He was therefore banished by Malfurion, despite having succeeded in defeating a high-ranking member of the Legion. After the demons were defeated at the end of the war, Illidan was approached by the demon lord Kil'jaeden, who ordered the Betrayer to destroy Kil'jaeden's traitorous creation, the Lich King. Amassing an army of servants in the form of the naga led by Lady Vashj, Illidan attempted to use the artifact known as the Eye of Sargeras to destroy the Lich King's stronghold of Icecrown, but was hindered by Malfurion, Tyrande and Maiev. Upon hearing that Tyrande was under attack by the undead Scourge, the demon hunter abruptly abandoned his mission and instead temporarily joined forces with his brother in order to save the woman they both loved. Knowing that this would earn the ire of Kil'jaeden, Illidan thereafter fled with his naga to the shattered realm of Outland, where he was later joined by new allies: the blood elves led by Kael'thas Sunstrider and the Broken draenei led by Akama.

Together with his servants, Illidan managed to overthrow the tyrannical ruler of Outland, the pit lord Magtheridon, and claim the demon's stronghold and army for himself. Moments later, however, Kil'jaeden appeared once again to remind Illidan of his task. After journeying to Icecrown, Illidan's efforts were ultimately stopped by the Lich King's champion, Arthas Menethil, who nearly killed the demon hunter in a fateful duel outside the entrance to the Lich King's chamber. Having survived his brush with death, Illidan retreated once more to Outland to muster his forces and prepare for his new plan: to destroy the Burning Legion and the demon world of Argus.

Despite succeeding in destroying the Legion stronghold of Nathreza, the Betrayer was ultimately cornered and struck down within his own sanctum by Akama, a group of adventurers of Azeroth and his vengeful former jailer, Maiev. However, even in death, Illidan's story was not yet complete: after the fateful confrontation, Maiev secretly brought the demon's corpse to the Vault of the Wardens so that his spirit could suffer the rest of his eternal sentence. There it remained for years, until finally, the Legion invaded once more.

When viewed in the Collection, Illidan has the following flavor text:

Being the first demon hunter makes him both proud and angry. Basically, he was perfect for the job. 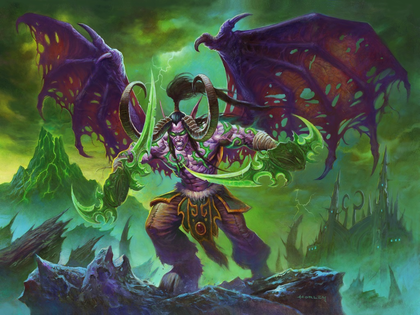