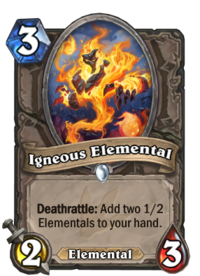 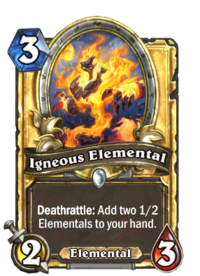 We wanted to name him "Ingenious Elemental", but he just wasn't that bright.

Igneous Elemental is a neutral common minion card, from the Journey to Un'Goro set.

Igneous Elemental can be obtained through Journey to Un'Goro card packs purchased online from the Battle.net shop, or through crafting. 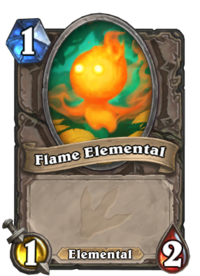 This minion is a decent fit for Elemental decks, granting the player two Flame Elementals to trigger their Elemental synergies.

Unlike the similar Fire Fly, the combined stats and cost of this minion and generated minions is quite poor, and it's considerably slower, making it mostly useful for Elementals.

It's also useful for The Caverns Below quest Rogues. The Flame Elementals it generates are identical to Fire Fly's elementals, greatly aiding in quest completion. Once Crystal Core is used, the two 1-mana 4/4s gives the player's board a massive advantage.

Another effective combo could be with the warlock quest, Lakkari Sacrifice, in which it can help feed your hand with cards to discard without losing your better minions. It also gives you two discard targets for one minion. Ravenous Pterrordax could give high value in synergy with this card, as it makes up for losing a minion for its adapt effect with the fact that it gives two minions back.