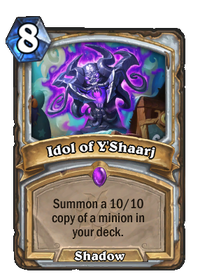 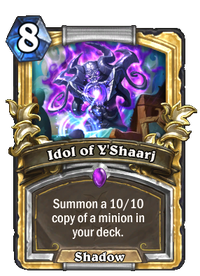 Without a tongue, it speaks in seven. Without a voice, its echo lingers forever.

Idol of Y'Shaarj is an epic priest spell card, from the Madness at the Darkmoon Faire set.

The Idol of Y'Shaarj summons a 10/10 copy of a random minion from your deck, to the board. Much similar to the case of Shadow Essence, the effectiveness does vary accordingly to the minion summoned. While cheaper minions with valuable effects (such as Sethekk Veilweaver or Reliquary of Souls) do benefit from having a 10/10 body, the ideal case would be that a copy of higher-costing minions is summoned (eg. Convincing Infiltrator, Devout Pupil, Reliquary Prime). And of course, there is poor Battlecry synergy from this spell.

This is one of the four Old God artefacts, a unique theme of Madness at the Darkmoon Faire. This artefact's effect resembles Y'Shaarj, Rage Unbound's.