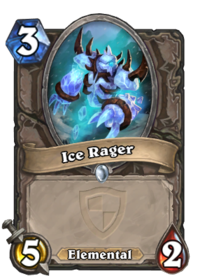 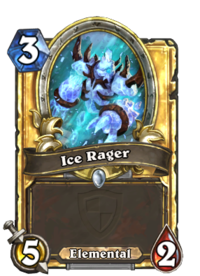 Ice Rager is a common neutral minion card, from the Grand Tournament set.

Ice Rager can be obtained through The Grand Tournament card packs, or through crafting.

Due to its high Attack but low Health, Ice Rager is a good target for warlock spell Shadowflame. It can also be immediately buffed with cards such as Shattered Sun Cleric or Defender of Argus to increase its Health, making it more difficult to destroy.

For Druids, Druid of the Flame seems strictly superior as it becomes a Beast, and can be become either a 5/2 or a 2/5 (or sometimes a 5/5) but, Ice Rager is an elemental so it could possibly be better in certain situations with cards like Servant of Kalimos, in which you also are able to discover an elemental. If you are running a wild druid deck that has some elementals, Ice Rager is a card to consider.

Much like how Hearthstone's version of the Magma Rager depicts a bound fire elemental, the Ice Rager appears to be a type of bound water elemental. However, Ice Ragers specifically are original to Hearthstone. 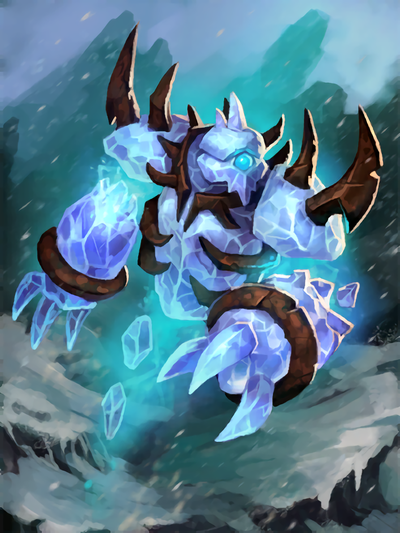