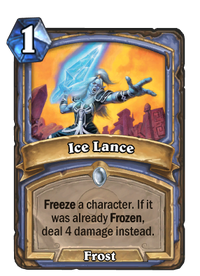 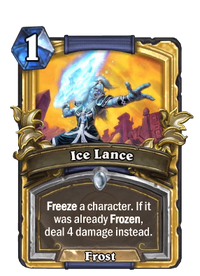 Freeze a character. If it was already Frozen, deal 4 damage instead.

The trick is not to break the lance. Otherwise, you have "Ice Pieces." Ice Pieces aren't as effective.

Ice Lance is a common mage spell card, inducted into the Hall of Fame set, formerly from the Classic set.

Ice Lance can be obtained through crafting only.

Ice Lance is an excellent card for a mage deck that can be used for control or for high damage output. At a cost of only one mana, it's a very cost effective way of slowing down a very strong card of your opponent, such as Deathwing, and its low mana cost means that it combos well with other mage cards that freeze opponents, such as Frostbolt or Cone of Cold, allowing for healthy damage output. It can be combined with Shatter for a 3-mana removal, and if you added a Mana Wyrm earlier on it will become a 3/3.

Ice Lance is an instant cast mage spell that deals Frost damage, with no cooldown. Critically, the damage is doubled versus targets that are frozen, making it extremely effective when combined with other Frost spells, although while this matches its appearance in Hearthstone, its World of Warcraft incarnation does not itself freeze targets. As such, it is a key spell in the Frost mage arsenal, allowing them to deal the sudden bursts of damage for which they are infamous. As an instant spell, it is often cast while moving, typically while strafing away from pursuing targets, allowing the mage to deal powerful damage while fleeing.

Commentary: Freeze Mage is a fun deck that has been around for over three years now, and we’d like to see more variety with Mage decks after each major release. This move allows Freeze Mage to continue existing in Wild, while creating more variety in Standard. Ice Lance also prevented us from making powerful Spell Damage cards and designs that allowed you to duplicate your cards. Ice Lance was also a very high burst damage card, sometimes being a key component of 30 damage combos.