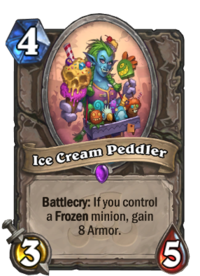 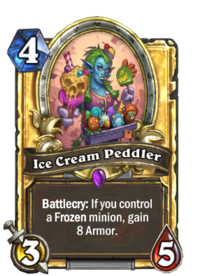 Battlecry: If you control a Frozen minion, gain 8 Armor.

I scream, you scream, we all scream when we see a Freeze Mage.

As opposed to Cryomancer and Coldwraith, this card requires a Frozen friendly minion to reach its maximum value. This card can be combined with Hyldnir Frostrider, Cryostasis or Frozen Crusher to activate its battlecry without losing tempo.

[...] what’s better in the muggy, sticky, sweltering jungle heat than. . . soup? The usual funnel cake vendors were absent. Instead, enterprising Tuskarr were competing with the trolls peddling magically frozen ice cream to sell steaming bowls of stew with unidentifiable chunks floating in it.[1]