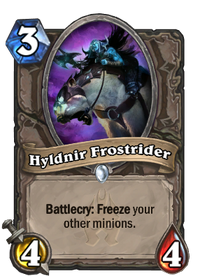 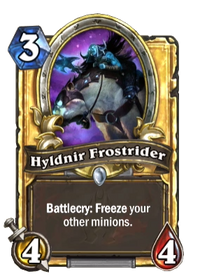 Battlecry: Freeze your other minions.

Don't be fooled, that polar bear's the one in charge.

Hyldnir Frostrider is a common neutral minion card, from the Knights of the Frozen Throne set.

Hyldnir Frostrider can be obtained through Knights of the Frozen Throne card packs, or through crafting.

Hyldnir Frostrider is slightly overstatted for a 3 mana minion, making it fairly strong in Arena. Although the downside is quite severe, this minion can be played on an empty board to nullify its effect completely.

It can also combo with the Shaman card Moorabi to create a copy of each friendly minion, although this will leave your entire board frozen.

Summon
Ride the Polar Bear Express!
Attack
The glory is mine!

The Hyldnir are a small faction of frost vrykul living primarily in Brunnhildar Village in the Storm Peaks. They are constantly warring with the Sons of Hodir in the name of Thorim. They have a strict matriarchal society with the males, both hyldnir and other races, being used as manual labour, mostly in the nearby Forlorn Mine. Even females not of their faction are regarded with more respect then any man. Most, if not all, female members of the are warriors and train to compete in the Hyldsmeet, a competition in which warriors fight to determine who shall rule by Thorim's side and ultimately climaxing in the Drakkensryd.