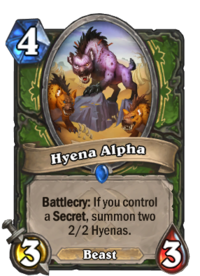 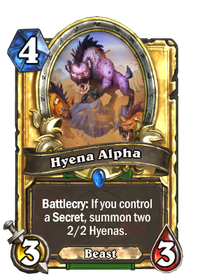 Battlecry: If you control a Secret, summon two 2/2 Hyenas.

Everything the sun touches is ours—so long as it's already dead.

Hyena Alpha is a rare hunter minion card, from the Saviors of Uldum set. 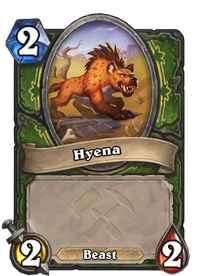 A powerful card for any type of midrange Hunter decks. As long as it activates its Battlecry, it generates 7/7 worth of stats for a much lower cost. Playing Secrets that are more difficult to activate like Rat Trap will help guarantee the Battlecry going off on curve.

Hyenas are large carnivorous beasts found in the most barren areas of Kalimdor. They are most dangerous when traveling in packs. Rotting corpses attract hyenas and from feeding on the dead they often have an ability to inflict dangerous diseases on those who fight them. Hyenas possess tremendous strength in their jowls.

Centaur hunters in the Barrens and Desolace often keep them as pets, while they also serve as mounts for Uldum's desert pygmies and Vol'dun's vulpera.