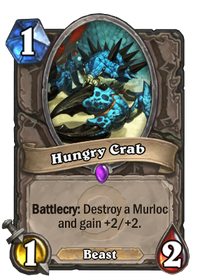 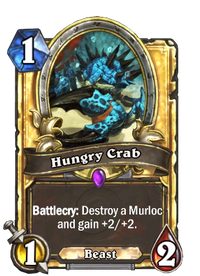 Murloc. It's what's for dinner.

Hungry Crab is an epic neutral minion card, from the Classic set.

Hungry Crab is a tech card specifically designed for use against murloc decks. With an enemy murloc on the board, this card summons a 3/4 minion and removes one enemy murloc - all for only 1 mana. When facing any murloc deck, this card is a fairly safe bet. Much of the choice of including this card in a deck therefore depends on the likelihood of encountering murlocs. If the opponent plays few or no murlocs, this is a weak card, and far poorer than other high-rarity options for the same cost.

Hungry Crab can also be played as part of a murloc deck; however, this is generally a risky play. When murloc buffs are active, a 1-cost murloc is certainly superior: you get two buffed murlocs instead of one 3/4 Hungry Crab. However, in situations where you drew badly or your buffing murlocs have been removed, a 3/4 Hungry Crab can provide decent staying power. As such, this card's utility in a murloc deck will vary immensely from game to game and some playstyles will benefit more than others.

Ideally, use this card's battlecry to remove a particularly powerful or valuable murloc, such as Murloc Warleader or Old Murk-Eye. 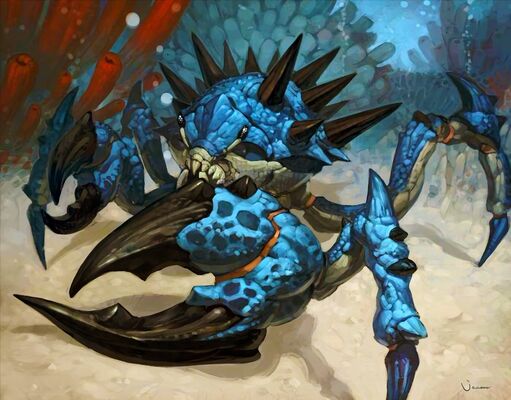