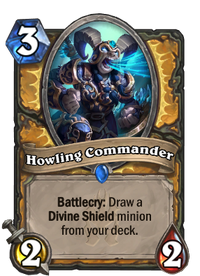 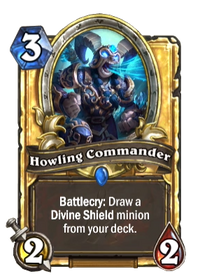 Battlecry: Draw a Divine Shield minion from your deck.

Enlistment in her battalion comes with several pairs of earplugs.

Howling Commander is a rare paladin minion card, from the Knights of the Frozen Throne set.

Howling Commander can be obtained through Knights of the Frozen Throne card packs, or through crafting.

Summon
Urgh, must I slay you AGAIN?
Attack
Advance!