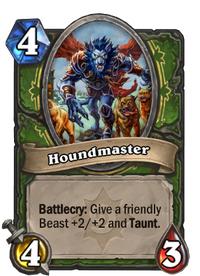 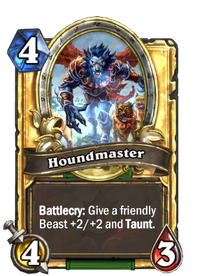 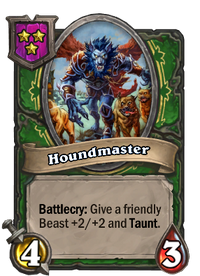 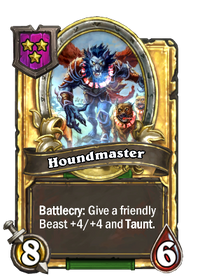 Battlecry: Give a friendly Beast +2/+2 and Taunt.

"Who let the dogs out?" he asks. It's rhetorical.

Houndmaster is a hunter minion card, from the Basic set.

Two copies of Houndmaster are automatically included in all players' collections upon unlocking the Hunter class.

Two Golden copies of Houndmaster are a reward for raising a Hunter to levels 28 and 30.

This is an excellent card for any deck featuring Beasts. It is an aggressive 4 Attack, 3 Health minion (these stats normally cost 3 mana), paired with a Battlecry that grants a friendly Beast 2 Attack, 2 Health, and Taunt - the traits of the 2 mana Frostwolf Grunt - granting the value of 5 mana for a cost of only 4. In fact this Battlecry is even better than Frostwolf Grunt, since these stats are merged with the original stats of the buffed Beast and in most cases can be used right away (essentially an indirect Charge).

The one downside to the card is that it requires a Beast to make use of its Battlecry. Without this, Houndmaster is simply a more aggressive and more expensive Spider Tank. That said, Houndmaster works excellently with any Beast deck and can usually find a target fairly easily in most hunter decks. Ideally, use it when the Beast has already had a turn to rest, enabling its bonus Attack to be put to immediate use. Alternatively, it can be useful for instantly creating a Taunt for hasty defence. The combination of these two bonuses makes it ideal for creating a strong defender, but can be risky when the target Beast is a valuable minion, as Taunt will put it on the front line for enemy attacks.

Overall, Houndmaster is very cost efficient and a great addition to any hunter deck.

When playing against Houndmaster, keep in mind a Silence will not remove the buffs if used on this card. The Silence must be used on the minions that receive the Battlecry.

Summon
I let the dogs out. 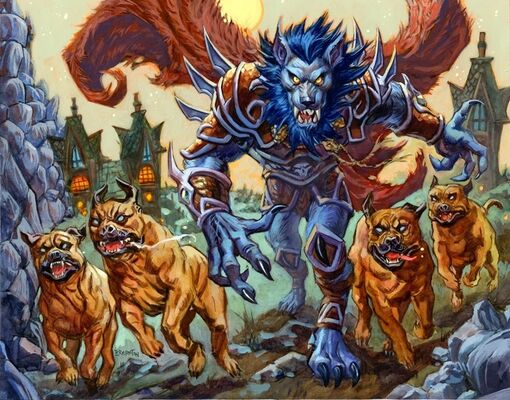